Home > What we do > Habitat Improvement > Water Quality

Cunsey Beck is the outflow from Esthwaite Water and flows westerly for approximately 3.1km before it enters Windermere at Cunsey Beck Foot (see map 1 below). Esthwaite Water suffers from high phosphate concentrations which are attributed to historic fishery/fish farm activities and the waste water treatment plant discharge at the northern region of the waterbody. 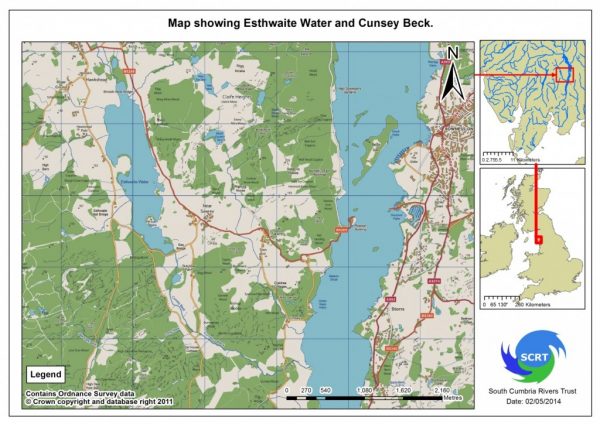 The lake is designated as a SSSI and is its status is categorised as ‘unfavourable recovering’. The lake fails its condition assessment in relation to the conservation objectives, but favourable management is being implemented to improve water quality and trophic status, including removal of the fish farm, improved sewage treatment and reduced nutrient inputs from the wider catchment. Within the lake, the marginal macrophyte community is also categorised as ‘unfavourable recovering’ due to declines in monospecific common reed swamps (Phragmites australis) and most notably, the extinction of the nationally rare Slender naiad (Najas flexilis).

Algal blooms are a common occurrence in Esthwaite which are linked to the eutrophic state and frequently cause anoxic conditions. Consequently, the Water is failing WFD targets due to Total Phosphorus, Dissolved Oxygen, Macrophytes, Phytoplankton and Chironomids (Invertebrates). In their ‘Leven WFD Evidence Pack’, The Environment Agency identifies the reasons for failure of these ‘elements’ as sewage discharge and dairy/beef agriculture. Whilst there has been substantial work within the catchment designed to reduce the nutrient inputs (Higher Level Stewardships and improvements to the WWTP) the waterbody remains to suffer from high phosphate concentrations. The sediments on the lake bed are highly eutrophic and leach nutrients into the overlying water column. These sediment bound nutrients are likely to persist for many years to come. Whilst the source of the nutrients has been addressed, there is an urgent need to tackle the consequences of the eutrophic sediments. As the removal of the sediments has been shown to be highly destructive and costly, it is necessary to employ novel techniques designed to address the effects of eutrophication. 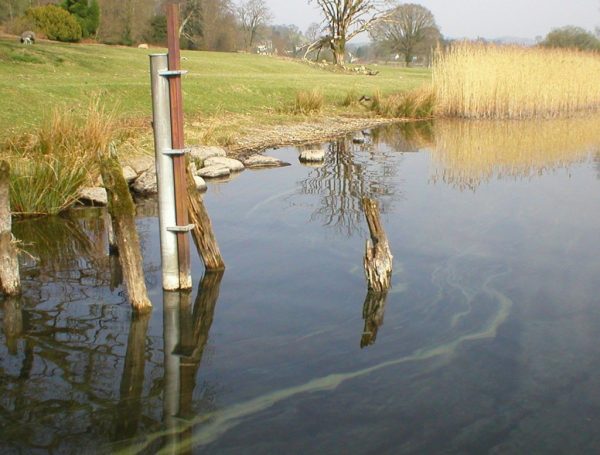 Cunsey Beck is also a WFD failing waterbody in terms of its fish populations which are attributed to physical modifications in the Environment Agency ‘Leven WFD Evidence Pack’.

The project has been designed to address the following issues (WFD failing elements):

In order to address the WFD failing elements, SCRT propose to implement the following physical interventions: 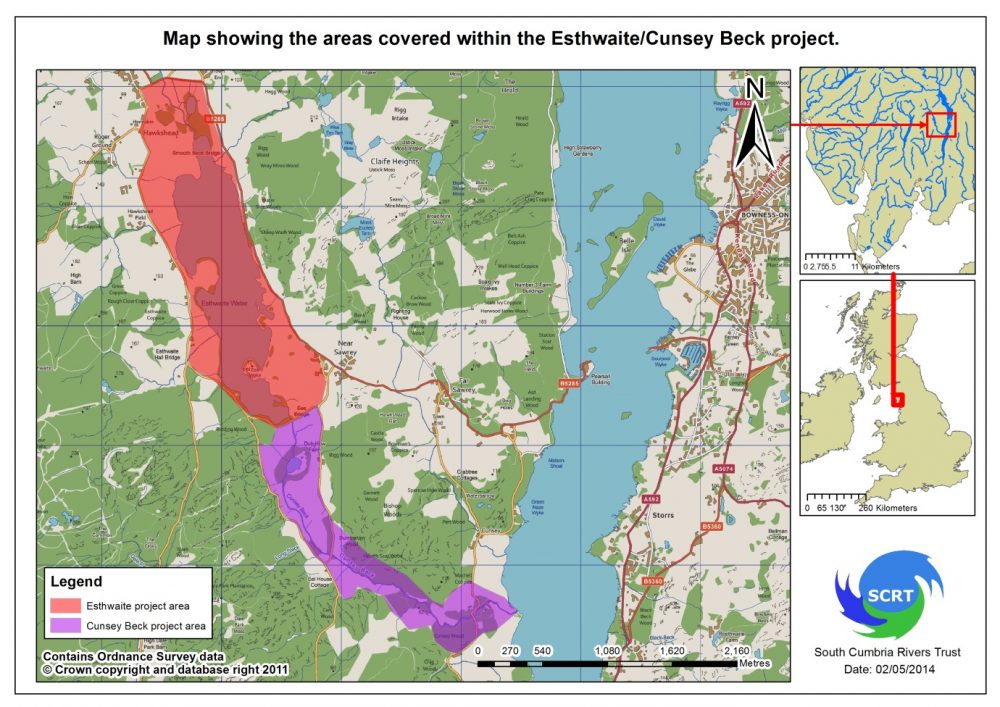 1a) FAILING WFD ELEMENT: Total Phosphorus. INTERVENTION: Create buffer strips along the shores of Esthwaite together with stock-proof fencing. Alternative drinking solutions will be created where necessary.

1b) FAILING WFD ELEMENT: Macrophytes. INTERVENTION: complement the lake shore fencing with floating fences to protect the declining Phragmites australis reedbeds from grazing livestock, geese and erosion from waves. This will make use of SCRT’s extensive experience gained during the Windermere Reflections ‘Restore the Shore’ reedbed project in Windermere. Areas of reedbed that are declining will be restored through a combination of tree felling (opening up the canopy to increase light levels) and reed planting.

1c) FAILING WFD ELEMENT: Phytoplankton. INTERVENTION: The expansion and rehabilitation of Esthwaite’s littoral macrophyte communities will also provide additional habitat for zooplankton; populations of which have been shown to be diminished due to the lakes fishery (predation). The CEH have made recommendations that a greater zooplankton density would be beneficial for the lake as this would restore the ‘top-down’ control of phytoplankton. Reed rhizomes and woody debris (in the form of brash bundles) will provide refugia for zooplankton.

2a) FAILING WFD ELEMENT: Fish. INTERVENTION: Continue the works that were initiated in the ‘Restoring the Rivers’ project. This will involve consultations with Graythwaite Hall Estates to finalise the locations of riparian fencing, buffer strips, riparian tree planting and LWD dams. These practical interventions will reduce livestock access to the river, thus reducing damage to the banks and direct faecal inputs. The creation of buffer strips through stock exclusion and tree planting will intercept surface run-off and will increase infiltration rates, reducing diffuse nutrient and livestock faecal inputs. Increases in tree cover will provide cover and refuge for fish and will increase both allochthonous inputs (leaf litter and terrestrial invertebrates). LWD will be positioned within the river channel at strategic points to create diversity in flow and hydro-geomorphology (thus forming gravel bars in previously straightened sections. The LWD installations will be configured to act as flow deflectors to encourage movement of silt accumulations with the aim of exposing more clean gravels.

The project will also benefit from £20,000 in-kind funding from SCRT in the form of materials and equipment secured in a previous grant from the Morecambe Bay Nature Improvement Area and through the provision of volunteer workforces.

Elterwater is situated in the Langdale valley, approximately half a mile south-east of Elterwater village and two miles west of Ambleside. It is formed from 3 connected basins and is fed by both Great Langdale Beck and Little Langdale Beck. Historically, the course of both of these tributaries have been altered in an attempt to improve drainage in the surrounding agricultural fields, to the extent that they by-passed most of Elterwater altogether. 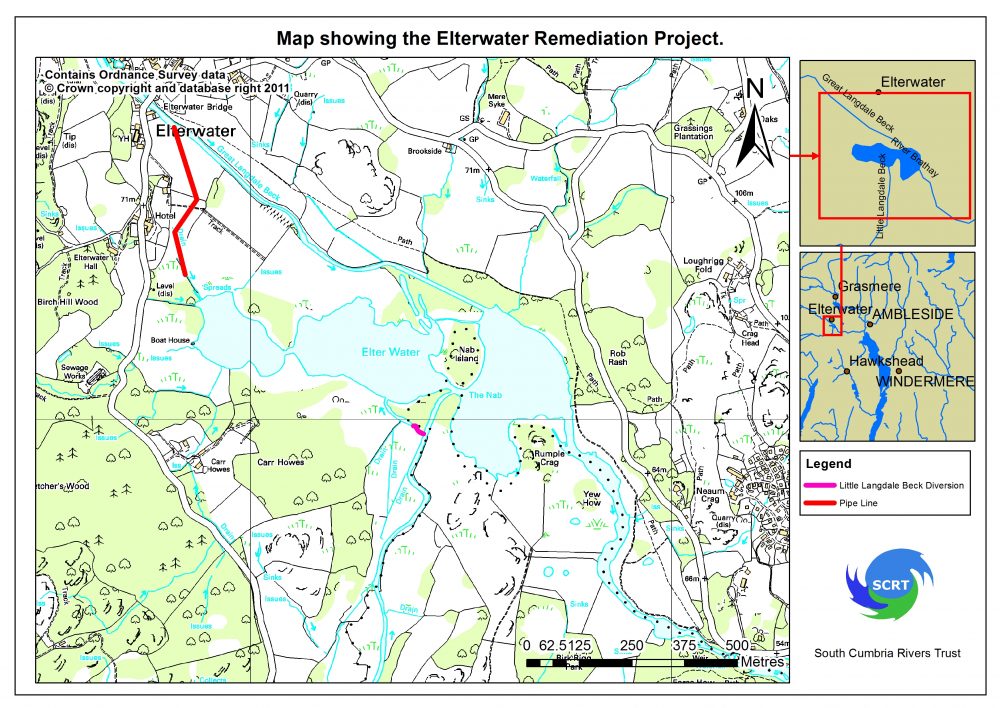 The site covers a diverse series of habitats ranging from open water, swamp and fen to marshy grasslands, willow and alder carr and drier oak woodland. This series of habitats is particularly well represented at Elterwater, being the most extensive and one of the least disturbed examples of lakeshore wetlands in South Cumbria. Few lakeshore transition habitats of similar quality remain in Cumbria, other examples in South Cumbria are North Fen National Nature Reserve, White Moss Common, Rydal and Pull Wyke Bay, Windermere.

For approximately 40 years until the late 1990’s the waste water treatment plant (WWTP) which served the village of Elterwater and the Langdale valley discharged treated water into the inner basin of Elterwater. Whilst this discharge was consented, it contributed considerable amounts of nutrients into the inner basin which have, over the decades, accumulated and currently cause the lake to have poor ecological quality with frequent episodes of anoxia (no oxygen), algal blooms and is poor habitat for the majority of species of fish and plants that should be present in this protected area.

South Cumbria Rivers Trust are working with United Utilities in a joint project to remediate the lake and return it to its former glory! The project has two phases;

These interventions were completed in 2016 and there is a now an on-going monitoring programme to understand the effects. Initial results show that the interventions are beginning to make some improvements, in particular to the water quality of the Inner Basin. The pipeline is transferring clean well-oxygenated water into Elterwater and the data suggests this is improving oxygen levels at depth, potentially reducing the amount of phosphorus released from the sediments into the water column. Chloropyll a concentrations, as an indicator of algal blooms, are also reducing. However, continued monitoring will be important to fully understand and quantify the effects.