Home > What we do > Habitat Improvement > River Restoration

South Cumbria Rivers Trust are now into their 10th year of the Environment Agency(EA)/Natural England(NE) funded programme which aims to bring river units of the River Kent & Tributaries Site of Special Scientific Interest(SSSI) and Special Area of Conservation(SAC) into improving condition.

The Cumbria River Restoration Strategy was developed to help deliver the joint NE/EA drivers to improve the quality and function of three riverine SSSI/SAC sites; the Eden, Derwent and Kent catchments. River restoration interventions reinstate natural river processes that provide benefits to both people and wildlife. Our rivers have been extremely modified over the years and reintroducing natural processes; connection with their floodplain, sediment transport processes, flow variation and barrier removals can reshape rivers and provide the habitats required for a healthy river ecosystem.

SCRT are lead partners in the Cumbria River Restoration strategy for the River Kent SSSI/SAC, working to scope and deliver work that benefits the special nature of the River Kent. The work is concentrating on areas where human modifications to the Kent and its tributaries prevent the river functioning as a natural watercourse.

We have been working in several areas to date. Below are some of our first projects. You can find more on our Current Project pages.

The River Gowan between Ings and Staveley in southern Cumbria was the first site in the 6 year river improvement project that aims to bring benefits to the natural form and function of the River Kent and Tributaries Site of Special Scientific Interest.

The project, led by the South Cumbria Rivers Trust in collaboration with the Environment Agency and Natural England removed approximately 70 metres of man-made flood embankment to allow the river to re connect with its floodplain and help put back some of its lost meanders.

The project location on the River Gowan, a tributary of the River Kent, is in a section where past river engineering works formed a 300m long unnaturally straightened and constrained river channel through which the river has since been prevented from behaving in a normal manner. Meandering rivers and their ability to be able to over top their banks in high flows can bring benefits for both wildlife and for the human population.

The sinuous form of a natural meandering river creates a variety of flows and habitats by producing a succession of deep and shallow areas. Deeper water areas, including pools, are created by localised bed scour on the outside of river bends with shallow areas forming on the inside as sediments and gravels are deposited. Deep water habitat acts as a refuge for a number of species and is particularly important for adult fish to allow them to feed in relative safety, rest during migration and evade predation. Sediment and gravel deposition that form the shallow areas also provide a variety of valuable habitat for species like lamprey, the endangered eel and the aquatic invertebrates which are a key food source. This variability in the river bed profile allows the river to absorb more oxygen as its flow is hastened over the shallow, gravel areas. Clean and well oxygenated gravels are vital for successful salmon and trout spawning and the production of their juveniles.

The variability of habitat provided by a naturally functioning river also offers greater opportunity for more diverse forms of plant life both in and out of the water which in turn offer their own opportunities for many more aquatic and terrestrial species.

In rivers constrained by bank reinforcement this process is not active and many of these benefits can be lost. Natural bank heights also allow the river to move more easily into its floodplain in high flows which alleviates flooding pressure for domestic properties downstream.

Apart from the RRS benefits in terms of re-naturalising this river section there are also important and positive flood alleviation benefits from such a scheme. Although small in scale, these works help to demonstrate flood storage benefits to farmers/landowners and communities concerned and affected by recent and increasing flooding events. Staveley village and Kendal downstream of the project site are cases in point.

This film shows the 4 weeks project compressed into just 2 minutes:

At the head of the River Kent valley are a number of large slate spoil mounds which are the remains of historical roof slate mining in the area which ceased in the mid 1960’s. The river has now broken into these mounds and particularly during times of high flows the river transports large amounts of coarse and fine sediments from this area throughout the system resulting in an increased height of the river bed as a result of aggradation.  To protect habitats and prevent flooding downstream a long term maintenance solution was needed.  SCRT, Environment Agency, Natural England and EU LIFE IP ‘Natural Course’ worked together on the Jumb Quarry project as part of the Cumbrian River Restoration Strategy. The project removed 9000 tonnes of mine spoil from the east Kentmere valley just south of Kentmere reservoir.

This project, now completed, aimed to re-naturalise a section of Dubbs Beck, a tributary of the River Gowan. Dubbs Beck has been heavily modified (more than in the EU WFD technical sense) by both Victorian water resource managers and farmers who, understandably, responded to the land drainage benefits of a (former) water resource catchment, with issues of ‘catchwaters’ and culvert drainage widespread. A straightened section with embankment stretched for 525m along the mid-section of the beck. The land at either side of the river showed no evidence of old river channels (palaeochannels) on the floodplain. This indicated that the current route of the river is unlikely to have been different in the past. Further up in the catchment, upland riparian vegetation stabilises the channel course (though not as a straight course as created by the revetment) and it is anticipated that as the vegetation develops at the restoration site, a natural water coarse and riparian corridor will be established. The major benefit for removing the revetment is flow diversity which will in turn promote erosion and deposition of sediments and the regeneration of suitable habitats for fish and invertebrates.

The project is a partnership between South Cumbria Rivers Trust, the Environment Agency, Natural England, the Biffa Award and the EU LIFE IP ‘Natural Course’ project.

Following the embankment removal and regrading of the bank profile, the access bridge needed to be replaced with a wider span. In order for the beck to function naturally and allow suitable flows to pass it was essential to remove the existing structure which acted as a pinch point constraining the beck. 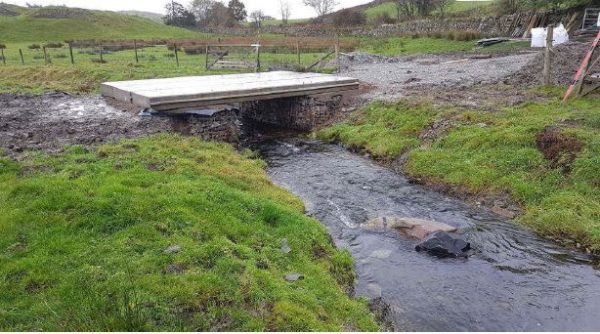 Nearly 800 metres of man-made embankment and river protection were removed from a field just opposite the The Eagle and Child Inn, Staveley. This has enabled the river to reconnect with its floodplain and will help alleviate flooding in the village and further downstream.  Improvements to in-river habitats will also help spawning fish and the endangered White-clawed Crayfish.

SCRT are currently working to remove Bowston weir in Bowston near Burneside, as part of the Cumbria River Restoration Strategy, due to be removed this summer. You can find out more information about this by visiting the project page here; Bowston weir removal proposal