In July and August last year, a ‘call to arms’ issued to a range of volunteers resulted in 27 people turning up to attack a huge area of Himalayan Balsam in woodland above Elterwater quarries which had become badly infested. A combination of this effort, strimming by contractors engaged by Burlington Quarries and South Cumbria Rivers Trust and a final clear up by staff of the Holker Group (which owns Burlington) resulted in about 4ha of heavily infested land being cleared of the stuff. Before and after pictures of one part of this area are shown below (I think you’ll be able to guess which one is which). Thanks are due to all those involved. Seeds are viable for 2-3 years, so there will be more this year, but we hope they will be much depleted in number. We hope to be able to tackle it again with renewed vigour this summer.

But is it actually worth the effort? It is a fair question and one that is not possible to answer with a resounding ‘Yes’. 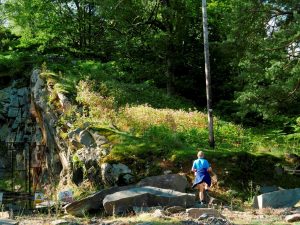 There are many types of invasive species, so why just focus on this? It is well-established and widespread as anyone who has ‘tuned-in’ to its pink flowers will testify, so are we too late? The bees love it and it’s quite pretty – it would be a shame for it to be eradicated. These are all fair points. Let me try to respond to them:

“I wandered lonely as a cloud;

That floats on high o’er vales and hills; 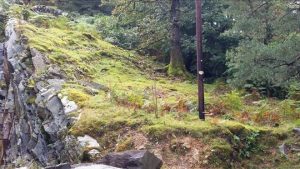 When all at once I saw a crowd;

A host, of pinky purple balsam”

Doesn’t really scan, does it?

A group of volunteers have been operating under South Cumbria Rivers Trust have been clearing it from the Kent catchment for some years, with notable success – you won’t see much/any of the stuff in Kendal nowadays. We want to build on these existing efforts and focus on a few more areas and hit them really hard. This means regular (every 4-6 weeks) visits to target areas to remove every single balsam plant, starting in late May and running through to October, to ensure that not a single plant is allowed to seed.

That’s a big ask for any single group, however keen they may be. So, we are trying to pull together volunteers from various different interests. If you are interested in finding out more, please contact Ken on askentaylor@gmail.com.