Home > Blog > Staveley leads the way to a drier future

Staveley leads the way to a drier future

With the effects and aftermath of Storm Desmond still very much in the minds of the people of Cumbria, South Cumbria Rivers Trust announces a new community supported project that will have benefits for both flooding and wildlife on the River Kent.

Preparations are now underway for the removal of a section of man-made river embankment on the River Kent in Staveley. At this village centre site, the river will once again be connected to its floodplain which, at times of higher flows, will allow it to spread into adjacent pasture. This natural, spreading movement of the river will directly help to reduce flooding pressure in Staveley village and contribute to a reduction in flood water being delivered downstream to Kendal.

This “River Restoration Strategy” scheme, funded through the Environment Agency and Natural England has the support of the local council and landowner, John Nicoll, who have been investigating opportunities with South Cumbria Rivers Trust to help relieve flooding in Staveley.

Over the last hundred years or so, many stretches of the River Kent and its tributaries have been straightened, reinforced and embanked mainly to reduce flooding on agricultural land to increase food production. Now, flood experts and conservationists are calling for rivers to be reconnected, where appropriate, with their natural floodplains to provide a greater buffer to downstream flooding and to make the river more natural. By ‘slowing-the-flow’ of water in the upper catchment, the severity of urban flooding can be reduced in downstream areas. The removal of embankments also allows the fields in the floodplain to drain more easily once the flood waters have receded. The “Strategy” is also looking for opportunities to re-meander the river into its historic channels: another approach helping to ‘slow-the-flow’ by reducing the gradient of the river.

SCRT’s Technical Officer, Dr Mike Sturt said “Following the recent flooding in Staveley and Kendal, this project not only demonstrates the importance of working with, rather than against, nature but also how a single, enthusiastic and environmentally minded landowner working with the community can help safeguard that community and its natural heritage. This project forms part of the Rivers Trust’s ‘whole catchment’ approach to flood alleviation and is one that should be encouraged far more widely in flood prone valleys like the Kent”.

The project in Staveley will involve the removal of approximately 1km of informal embankment, created from decades of accumulated dredging material. This will reduce the height of the river bank by around 60cm in an area opposite to the confluence of the River Kent and River Gowan, allowing greater capacity for flood waters to spread out thereby potentially reducing flood risk for nearby properties close to the confluence. As part of the project, the field boundaries which were damaged during the last floods will be repaired and made more flood resistant.

The Landowner, John Nicoll, said “In recent years flooding in Staveley has become a very real problem and unless steps are taken it seems likely to be a continuing, and maybe a growing problem. Re-connecting fields more directly to the river to act as a traditional flood plain seems to me to be the responsible and rational thing to do”

These restoration techniques not only benefit flooding issues in towns and villages but will help to recreate a wide range of habitats which are not found in modified or straightened rivers. Examples include improved gravel beds where fish can lay their eggs, shallower margins where aquatic plants can survive and deeper pools where larger fish can take refuge. Increases in the availability of these habitats will help to improve the populations of several threatened and endangered species such as the white-clawed crayfish, the Atlantic salmon, brown and sea trout, otters and kingfishers.

Oliver Southgate, the Environment Agency Cumbrian River Restoration Strategy Programme Manager said, “We’ve been looking at various ideas in the catchment with South Cumbria Rivers Trust and Natural England‎ for some time now. It is great that all the hard work delivered by this partnership is finally coming to fruition. Projects like this can really demonstrate the multiple benefits for both people and the environment, which can be realised through the delivery of river restoration schemes”

Rebecca Gray, Lead adviser at Natural England said, “Working on a project such as this is really exciting, it’s more of a community project, with people pulling together to help with a very real flooding issue in a way which not only protects, but enhances the river. Natural England is very happy to be part of this and other restoration projects, we offer support through advice and agri-environment schemes to help get projects like this off the ground. Restoring the river and allowing natural floodplain interactions is a great example of how helping to reduce flood risk is also good for the wider environment”.

Arthur Capstick, Chairman of Staveley and Ings Parish Council said “We hope this potential to release flood water earlier onto the floodplain will play a part in our determination to better protect properties in the village” 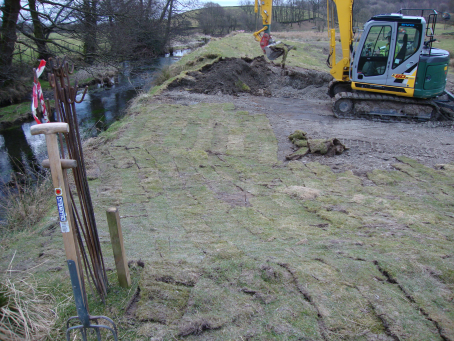 Embankment removal on the River Gowan in 2013. A similar approach will be used in Staveley