Hannah’s in the house – 1 month in

I have officially been a project officer for a month! Over the last couple of weeks, I have been busy completing walkover surveys to identify possible new projects. These took place in both the Poaka and Winster catchments, which gave me a chance to explore both places a bit more. It also gave me a great opportunity to put some of what I had learnt in the first two weeks to use, not only spotting issues but also putting forward possible solutions. I will be scoping a few of the projects I identified in the next couple of weeks to hopefully progress them in the future.

I have also started reaching out to landowners to discuss and agree plans for my first independent projects for the UU Raw Water project and Winster and Gilpin project. These projects had been previously identified but were at different stages in term of agreements being made and/or agreed. Both involve the construction fences and drinking points, to allow for a buffer strip to be created and provide an area for livestock to drink without causing heavy poaching. I now have one of these agreed, with a second in discussion and I am really excited to keep progressing with these projects as work begins!

Another aspect of my role is to carry out regular water quality checks around a few of the catchments. Last week, I went out with Rachael to collect my first set of water samples, learning how to use the equipment and the site locations. When we collect each sample, we also test the watercourse to identify changes in turbidity, temperature and pH. This can help us identify changes in the watercourse and identify possible problems. When we got back to the office, I learnt how to find phosphate and ammonia quantities in each sample, with our water quality kit. Next month I will be taking on sampling in the Poaka catchment independently, alongside developing a new plan to sample in the Duddon. 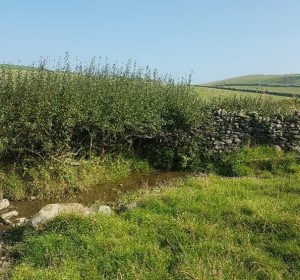 As well as working on the UU Raw Water and Winster and Gilpin projects, I also began reading about and visiting sites, to get a better understanding of the CaST project. This project aims to increase the density of reedbeds on Lake Windermere and is one of the other projects I will spending my time working on. It was really nice to see how reedbeds planted previously by the trust had developed, as well as see where work such as coppicing, or pegging down reeds, could be used to continue expansion of the reedbeds and promote regrowth from leaf nodes. This also provides an exciting opportunity to engage with volunteers on volunteer days in the future!

I have also been out doing some more electrofishing in the last week. Excitingly, this time we managed to catch a few more fish and a lot more eels! This time I also had my first try at measuring the fish and to practice my ‘fish wrangling’ skills.

Overall, I have really enjoyed the new aspects of the role I have taken on in the last few weeks and I am excited to keep developing new projects in the next couple of months!