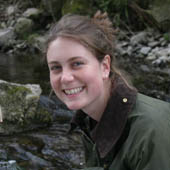 Bekka studied Zoology at The University of Liverpool and moved up to Cumbria in 2008 where she worked at the Freshwater Biological Association. She then specialised in invasive non-native species as a surveyor at a consultancy in Manchester before moving back up to Cumbria to become the Cumbria Freshwater Invasive Non-Native Species Initiative Coordinator in April 2010. Bekka loves being outdoors and getting muddy and wet!